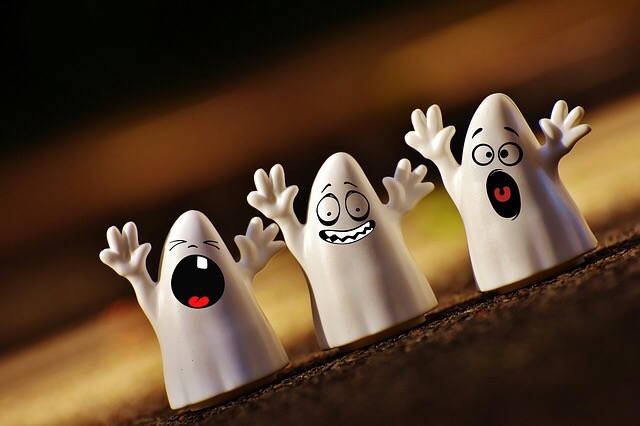 A few days ago I was tagged on Twitter to do a sort of blog dare.  I’m given a set of questions to answer on my blog, then tag someone else to do the same.  It’s a fun way to get to know other writers and share our friends’ blogs.  For this Halloween themed Q&A I was tagged by @AuthorHFerry, so let’s get right to it!

1. Are you a scaredy cat or a horror aficionado?

I can barely watch the beginning of Finding Nemo.  This kitty is quite happy in her cozy blanket fort of safety, thank you very much.

2. Would you ever consider writing a horror novel?

Unless I’m going for the book version of Sharknado, probably not.

3. What is your favorite bookish costume you’ve ever worn?

If I’ve ever dressed up as a book character I don’t remember it, but last year I attempted Rey to complement my son’s Kylo Ren costume.

4. What is the best bookish costume you’ve seen someone else wear?

Again, not very bookish, but I love Firefly cosplay, especially the groups.  I’d love to dress up as Kaylee some day.

5. What literary villain is your favorite?

When I first read this question I assumed I’d wind up picking some classic villain like Gollum or Voldemort, but to be honest, my favorite has got to be Levana from Marissa Meyer’s Lunar Chronicles.  She’s so complex and disturbing.  Reading her book, Fairest, was like a car crash.  It was disturbing and awful, but I couldn’t stop reading.  I was almost able to sympathize with her, and sympathetic villains are by far my favorite.

6. Will you be visiting a haunted house this year?

7. Would you rather go to a Halloween party or go Trick-or-Treating?

Um, can I just wait until the candy goes on sale and hide out in my blanket fort while I eat it all?

I don’t really know that many Halloween songs, so I’m gonna go with the classic Thriller.

9. What scares you the most about the writing process?

Submitting to agents and publishers.  I haven’t reached that point yet, but it sounds stressful and terrifying.

10. Monster Mash – if you had to say your antagonist was a mix of two traditional monsters, what would those be?

Probably an elf and a demon.

11. Would your Main Character be more scared of being left alone in a dark forest or an abandoned castle?

That one’s tough.  Ann would probably be more scared of the abandoned castle.  She loves plants so the forest wouldn’t scare her, though she’d not fond of the dark.  But if she were to become locked in a castle, no matter how big, she’d probably start to freak out.

12. Does anyone in your Work In Progress believe in ghosts?

Not at the moment, but that may change at some point.

13. What character would last the longest in a scary movie?

Maddie, hands down.  Ann might survive on accident, but Maddie would be the one fuming at the idiots going into the dark basement without even a flashlight.  And yes, she’d absolutely say, “I told you so.”

14. Good witch or bad witch – do you enjoy torturing the characters in your Work In Progress, or do you feel bad about it?

It depends.  I feel bad about the horrid things I’m inflicting on Ann, mostly because she’s so much like me, but I know they’re all necessary to make her a stronger person.  Maddie though, I’ll throw crap at her all day long just to see if I can break her.  So I guess that makes me a bad witch?

15. Pick a love interest from your Work In Progress – would they be most likely to scream like a little kid or punch someone in the face if they were scared abruptly?

Nic would scream, and then attempt to punch them, but the damage will have already been done.  Rogan wouldn’t even be scared, he’d just punch them out of annoyance.

Well, there you have it!  I hope you enjoyed the Q&A! And be sure to check out H Ferry’s answers on his blog, ferryfiction.com