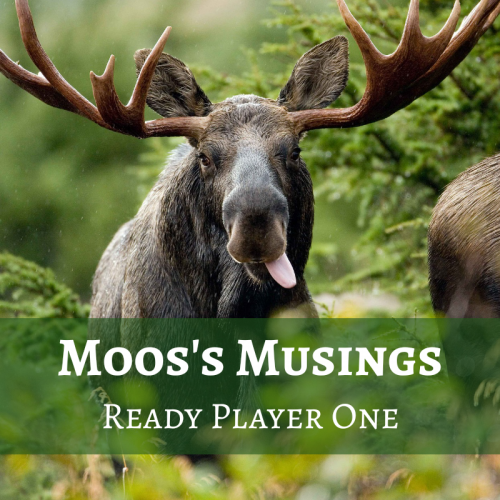 First of all, apologies. I seem to have mistaken Tuesday for Wednesday, and then I had to rewrite half of this post due to syncing issues, so perhaps we can just pretend today is Wednesday and this post isn’t a day late. Yeah? Awesome!

As Ivy mentioned this past weekend, I’m starting a new blog segment that I’m calling Moos’s Musings. In these posts I’ll share my thoughts and opinions on some creative work I’ve read, watched, observed, etc. It may be a book, a movie, a new creative tool of some sort. Works I’ve consumed that I happen to have an opinion on.

Now considering I don’t consume nearly as much creative work as I used to (and among those that I do explore, even fewer I have conclusive opinions on), Moos’s Musings won’t come up every week, maybe not even every other week. I will try to share one every month if I can, but I’m not going to form opinions on things just to have something to share with all of you. As Ivy would say, “I ain’t got time for that!”

So, if I happen to see a movie, read a book, or try something new and feel like sharing my thoughts, I will do so with a new Moos’s Musings. Because mooses do like to muse on occasion.

First, rather than write my own, poorly paraphrased description, I’ll just quote Goodreads. No one knows the book better than the author after all.

“In the year 2045, reality is an ugly place. The only time teenage Wade Watts really feels alive is when he’s jacked into the virtual utopia known as the OASIS. Wade’s devoted his life to studying the puzzles hidden within this world’s digital confines, puzzles that are based on their creator’s obsession with the pop culture of decades past and that promise massive power and fortune to whoever can unlock them. When Wade stumbles upon the first clue, he finds himself beset by players willing to kill to take this ultimate prize. The race is on, and if Wade’s going to survive, he’ll have to win—and confront the real world he’s always been so desperate to escape.”

Good, now we’re all familiar with the story. Let’s get to the musing. And don’t worry, there aren’t any spoilers.

While the plot isn’t exactly what makes this book stand out, it was executed quite well. It’s your typical treasure hunt storyline, with the twist of being set in a virtual world (more on that later) and all the clues and challenges being centered around 80s entertainment trivia. And it’s all those 80s references that really make this book stand out. If you’re familiar with most of them, you’ll no doubt love this book, but even if you’re not, Cline wrote it well enough that you can still enjoy the story. Because he focuses on the nostalgia Halliday felt for all of these movies and games and books. And as Wade learns more and more about this time period, he gradually comes to love the 80s almost as much as Halliday did.

Another aspect I loved was the romantic subplot. While the movie, in my opinion, overdid this part a bit, the book handled it much more realistically. Okay, as realistically as you can in a science fiction novel. The book lightly seasoned the plot with a bit of romance while the movie marinated the whole thing in it. Now, I’m not saying the movie is a romance disguised as an action movie, because the treasure hunt is still the main focus, but the romance is a lot more subtle in the book.

Now where I’m on the fence here is how the book and the movie connected the clues and challenges differently.

In the book, the only sense of progession you get is that each solved clue and completed challenge brings Wade closer to finding the Easter Egg, the final treasure. While that does come with an inherent sense of progression, especially as more and more competitors come into the picture, it’s hard to relate to that progression if you don’t have a strong competitive spirit.

In the movie all of the clues and challenges are connected by a strong backstory in addition to the overall competition. While this backstory is kind of cheesy and a bit predictable, it increases the sense of progression for those of us who aren’t inherently competitive. For us, we’re waiting for the climax of that subplot just as much, if not more than, the end of the competition. Each solved clue and completed challenge not only brings Wade closer to the Egg, but also reveals another piece of that backstory.

Though I wasn’t particularly blown away by any of these characters, they were all developed pretty well. No one felt flat or one dimensional, and they all grew to some extent throughout the story. Despite the fact that most of these characters spend a majority of the book hiding behind their avatars, I still got a clear sense that each of them had a lot more to them than just what I was seeing. Even many of the extras who didn’t actually effect the main plot felt real and authentic, and that’s not always easy to do.

My one disappointment with character, and it’s really more a matter of preference, is with regard to the antagonist. In the book, IOI (Innovative Online Industries) seems to be more of a “Sauron” type of antagonist. I know they’re there and that they’re a threat, but their interaction with Wade is pretty minimal. He has one conversation with Sorrento, the head of IOI, and that’s pretty much it. Wade goes back to his Frodo impersonation, though admittedly with higher stakes. Again, this isn’t necessarily a bad thing. After all, Sauron is a classic villain. I just felt that there could have been a Gollum or two thrown into the mix to add a little more immediate tension.

In the movie, IOI plays a much more immediate role in the story. Sorrento has his own point of view and his own character arc. In the movie I got to see him affecting the plot directly and reacting to the main characters’ actions in real time. It’s not a better way of telling the story by any means, just a different way and one I typically prefer. In the book, the heros are fighting a general evil. In the movie, they’re fighting a specific antagonist.

And now for my favorite part of this book. The best settings don’t just provide a place for the story to happen, but interact with the story and the characters almost as if the setting is its own character. And Cline accomplishes this magnificently. Wade lives in what are called The Stacks. It’s a huge trailer park, only the trailers and mobile homes are stacked on top of each other so they can fit more people into smaller areas. Then there’s the OASIS. A virtual reality world where anyone can be anything they want to be. Basically social media and VR gaming had a baby, and then gave it steroids.

It’s not just that these settings affect Wade, and all the other characters. Even more, it’s the contrast and interplay the settings have with each other that make them come alive. For the average person, the OASIS is a place where they can explore and be whoever and whatever they want to be. For Wade, the OASIS is freedom.

In the real world he is judged and ridiculed for things he has little to no control over. He’s poor, he wears whatever clothes he can find, and has very few possessions. In the real world, he’s stuck living with bitter people who treat him like a rodent they can’t get rid of. But in the OASIS he can truly be himself, free of the judgment, the stigma. In the OASIS he can choose who he spends his time with.

Sure it’s full of cool stuff and has all kinds of unique features, but what makes the OASIS really come alive is it’s meaning for the characters. In a culture where people are often judged for how we look and how much money we have, Cline shows us what it could be like if we were able to look past all that and accept people for who they are instead of for how they look or what we can get from them. And yet, for all that utopian idealism, Cline takes his settings a step further because he also illustrates the drawbacks of the OASIS and the advantages of The Stacks and the real world in general. He’s not just contrasting the real world dystopia with his made up utopia as if to say one is better than the other. He’s illustrating how utopias aren’t always perfect and dystopias aren’t always bad.

There’s a bit of context that went into my opinions about the quality of the writing itself. While watching some of the featurettes on the DVD I learned that Ernest Cline hadn’t actually finished writing the book when it was optioned for the movie. Many of the milestones most writers can only dream of, happened for him before he’d even finished writing the book. As jealous as that knowledge makes me, it also means that he had deadlines earlier in the process than most writers too. I can’t imagine he had much time to get used to writing under a deadline, and all of the ways the writing declines in quality, in my opinion, point to this as the cause.

First, he begins the book with a ton of exposition. It’s essentially an explanation of the setting, the conditions of the story, and all of Wade’s reasons for being in the situation he’s in. While this isn’t in itself a poor writing decision and in fact is often the norm for science fiction, I found it a tad boring. It’s the kind of intro I like to call “here’s what you need to know before I start the story.” In my opinion, the actual story doesn’t start until chapter seven. However, if he was strapped for time, it makes sense that he’d write it this way as it’s much quicker and easier than trying to weave it all into the story, allowing the reader to come to understand the context gradually, like a frog in boiling water. There are other places where this flat kind of exposition crops up as well and while it didn’t pull me out of the story, those moments did stand out.

One other thing that puts a dent in the writing quality is the way he adds in some of the 80s references. While the 80s pop culture is a fun twist to the typical treasure hunt story, some of the references felt a bit forced, like he had all these references he wanted to add, but he had a bit of trouble finding room for all of them. There were many places where even recognizing all the references, the lists of computer models, video games, and movies were so long I actually started skipping over most of them. As impressive as his clearly extensive knowledge of 80s pop culture is, I think he got just a bit trigger happy with it.

Overall, Ready Player One was a really fun read and an exciting movie that my whole family enjoyed. It’s an engaging story that doesn’t make you think too hard and while the writing could have been improved a bit, I’m glad I took the time to read it.

Have you read Ready Player One? Seen the movie? Let me know what you thought!